Come sail away with me 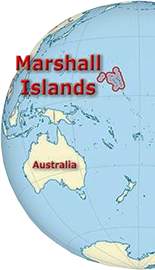 "When I received the slip of paper with my impromptu topic that said 'model.' I was glad I brought a model of an outrigger canoe sailboat with me. It made a great visual aid. The kind of outrigger canoe they use in the Marshall Islands.

"Marshallese tradition tells that their outrigger canoes didn't always have sails. They have a legend that explains how sails came into existence:

"A goddess had ten sons, they all wanted to become king. They devised a plan where they would race their outrigger canoes from one end of Ailinglaplap Island to the other, about forty miles. The winner of the race would be crowned King.

"The brothers lined their canoes up on the beach. After the race started, they were soon separated in distance by age, with the oldest in the lead. Their mother positioned herself with some large bundles on a small islet along their route. As the eldest son passed, she hailed him and asked that he take her and her bundles to the finish. The eldest son declined, thinking to himself that he could not stop because it would take too much time and her packages would weigh him down too much. He urged her to ask his younger brother. 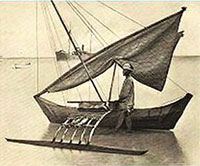 "She asked each of the brothers in turn as they passed. They each declined, saying, 'Ask my younger brother.' Finally, the youngest brother, who was in last place, stopped when called by his mother. When he stopped, she began to unpack her bundles and promised him that he would win the race. She pulled out a mast, boom sail, and the riggings. She showed him how to assemble the sail and how to tack in the wind. This is how the first sail came into existence.

"They took off quickly and with the aid of the wind in the sail, caught and passed each of the older brothers. They reached the finish well ahead of the other brothers and he was anointed king.

"There are many lessons to be learned from this ancient legend. The lesson I learned is the importance of leading from high ideals, from principle, from values, to be willing to sacrifice for my standards, to do the right thing for those who love me regardless of the consequences. 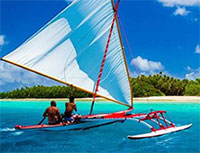 "The action I want you to take is to do the right thing, make the sacrifice regardless of what you think the costs will be.

"The benefit you will gain from sacrificing for principle, from putting your team first will be you will find your proverbial sails and win the race with ease."


win
the
race
with
ease

win the race with ease