Set Records and Win the Race

This past week, Craig Walker, President of Newberg Turbo Paper Group, and I met with the four operational managers of a northwest paper mill. This mill site, which is the largest paper mill site in the world with twelve paper machines, dates back to 1929. Craig and I worked with the previous management team about six years ago. Within the first 90 days of our working in the mill, they set a machine production record - the most paper ever produced in a day on paper machine #5. This was very exciting for us and for everyone who worked in and around the machine. I remember distinctly the guys from the paper machine up on the bridge hollering down at the guys on the winder, Go! Go! Go! as the winder took off the record tons. For the next several months we saw many other comparable breakthroughs, including major improvements on paper machine # 11. Within two years of us completing our assignment, the mill was sold to a Canadian investor. These new investors made several changes in the senior management team, important investments in some new technology, and went on to break some of the production records which we had helped the mill establish. Two years later they sold the business again at a huge profit.

Of the four managers we met with, two had formally worked for Craig when he was mill manager at SP Newsprint in Newberg, and one was a manager at a paper mill that our firm, Newberg Turbo Paper Group worked with in Northern British Columbia. They excitedly told us about recent site visits made to other southeast plants also owned by the new owners. They saw machine processes that operated to a higher standard than they have ever seen before and were excited about moving their mill to the next level of improved performance.

So the question all managers must ask and keep asking, is what is the best in class? When did we last set a record in production, sales, cost containment, and quality? It may not be as easy for you to measure production and the other key result area targets as it is for a paper machine, so be it. All this means is when you establish meaningful measures you will gain that much more. Your people are waiting for you to measure set target goals, solve problems and set records. Beat your bests. If you cant do it, or dont do it, someone else will. You will either set records and maximize the value of all your resources, or someone else will. This is as it ought to be. This is how you contribute to making the world a better place. 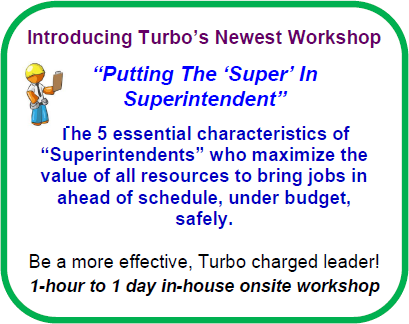