Shift Your Mindset to Positive Expectation

"My father, Ian Lennon from Glasgow, Scotland, immigrated to the USA in 1965. There was a shortage of skilled electricians in the U.S., and Bethlehem Steel recruited him to fill their need. My dad saw this as an opportunity to give his family a shot at more opportunity and a better life in America.

"He didn't have time between jobs to go back to his studio apartment so he ate at Maggie's Café every night. Naturally, as a Scotsman, he was frugal with his money, especially since he was saving for a house. He always ordered the "blue plate special," which included a main course and vegetable, all for 89 cents.

"Every night for 11 months, the waitress would ask him, "Do you want the soup or salad and dessert?" and he would reply, "No, just the main course and vegetable." He wanted to save his money.

"He finally saved enough for a down payment on a house and airfare for his family. Feeling like he had accomplished something, he decided to celebrate his success and say "YES, I'll have the soup and a slice of apple pie tonight." He thought, "Why not? I've worked hard to accomplish my goal. It's a little reward."

"After finishing the soup, main course,

and slice of apple pie, he was feeling content and ready to pay the bill (including the charges for the additional soup and dessert). To his astonishment, the bill was the same as always: 89 cents!

"He thought the waitress had made a mistake, but she explained the soup/salad and apple pie was part of the "blue plate special," and he realized he could have had the "extras" every night for the last 11 months for no additional cost. He kiddingly asked the waitress if he was in line for a refund for the soups and desserts he had paid for but done without." 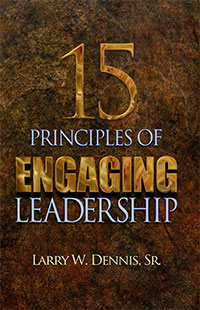 15 Principles of Engaging Leadership
KINDLE EDITION
Click Here to Order!
Bring out the best in your team!