Stand up for standards

Several years ago I was working on a large construction project in the Seattle area. The project was large enough that it had its own equipment maintenance department which consisted of an equipment superintendent and several mechanics. Unfortunately, the department had fallen behind on scheduled maintenance and continued to struggle with the various day-to-day operations.

The project manager asked me if I could help the maintenance superintendent out, and I said I would be happy to help. The superintendents main job was to coordinate equipment maintenance without disrupting the ongoing work operations too much. I began to check in with him daily and try to take some tasks off his hands. What I discovered, though, was that the problem wasnt that they were too busy; the problem was that the superintendent was regularly late for work and often didnt show up at all. He was very good at excuses and would often lie about running to get parts, etc. To make things worse, he was the son of a top level manager in the company. This is why the mechanics had been covering for him and not speaking up about his behavior. They were scared of the repercussions and had been letting it go on for over a year! I was right there with them, and I began to just do his job for him at first. I didnt want to make enemies with this guy or worse, his father.

After about a month of this, I changed my mind and approached the project manager about it. I told him what I suspected was going on and why the maintenance department was in such poor shape. As it turned out, this project manager had actually fired the same guy years ago on a different project for the same behavior! He was just waiting for the opportunity to get him off the jobsite.

A short time later, the project manager terminated him and I filled his position. It was a great experience for me and the mechanics were grateful for the help. Though I knew next to nothing about equipment maintenance, the mechanics were very good at what they did and appreciated having a manager who would actually show up in the morning. I guess the bar had been set pretty low!

The lesson I learned from this experience was to speak up when I see something wrong and not to worry so much about the consequences. The action I call you to take is to speak up when you see something that is clearly wrong. You cant just do everything yourself when someone else is not living up to their responsibilities. By speaking up and correcting issues, you will gain the respect of those around you, and in the end, your job will be easier for it. 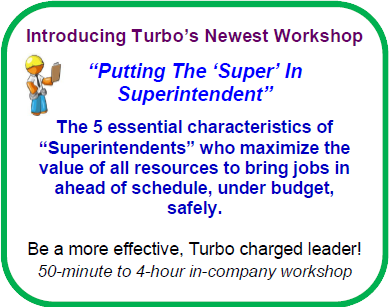