How do you communicate standards?

Sam, a crew member with a lot of potential and ability to advance in our company, has been abusing our smoke break policy. He wasnt taking them at the designated time and was extending his breaks beyond the allotted time limit. With the new hiring of additional staff weve done recently, hes become one of the senior laborers after working with us for just over eight months. Unfortunately, his bad habits are on display for our new hires. He is an example I dont want our new employees to emulate. Thankfully, they havent joined him in his extended breaks, but I was afraid they would. So I decided to talk to Sam about breaks using Turbos DARE+ Correction Process. I began by telling him that I had noticed him taking breaks before our agreed-to times and that he was taking longer than our agreed-to standard. I asked him, What happened? his response was, Oh, I guess youre right. I reminded him of our standard for the times and length of smoke breaks. I told him that he is in a leadership role now. I told him he may not have been aware of it, may not have considered it, but the new crew members are watching him and will naturally follow his example. The next day, I saw him leading the charge and behaving in a way that shows he is far more aware of the time he is taking for his breaks.

The lesson I learned from this experience is not to delay in correcting valued team members. I have a responsibility to enforce the standards that we say are important. The action I call you to take is work towards continuous improvement in performance with all of your employees. This includes training, acknowledgement, coaching and correcting. The benefit you will gain is breaking bad behaviors before they become habits, before they become part of or a definer of your culture. Stand up for standards and your team will continue to improve in all important areas of performance.

Kyle makes an important point. All feedback is for the purpose of feeding forward at a pace and in a direction that ensures the achievement of your ultimate goal - the highest possible quality, fastest customer response at the lowest effective price to maximize the value of all resources. The best leaders create a mission driven, goal oriented team with well-defined performance goals for each job in the organization. Balanced feedback is when 80% of your feedback, including meaningful training, is positive, supportive, encouraging, and acknowledging. Empowering leaders provide continuous constructive coaching for improved performance. When team members violate standards, they are quickly corrected in ways that are respectful, certain and consistent. Are you courageous enough to use Turbos DARE+ Correction Process? 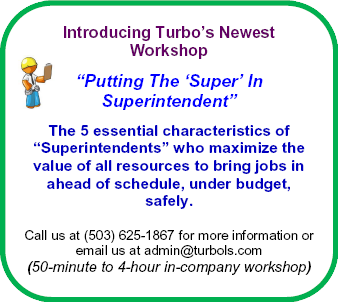