While driving through our equipment laydown yard last week I noticed one of our millwrights assembling one of the large electrical distributors. They are about 15 feet tall and slope upwards into a point at the top so it makes reaching the bolts to assemble them very difficult. I did a double take because as he was leaning over and stretching to reach the bolts, he was in an awkward position. I wanted to make sure he was safe. He was standing on an extension ladder that was leaning against the distributor at 45° angle and he was working from the tiptop of the ladder. It looked like an accident ready to happen. I was glad to see that he was tied off, which was good, but he did not have the ladder tied off so its feet could have easily slipped out, leaving him hanging 10 feet in the air.

I politely asked him if he could come down so we could talk about the situation. As it turned out, he is a first year apprentice and was installing the few final bolts that are the most difficult to reach. I started out by thanking him for tying off while working up top, then I asked him why he didnt tie the ladder off as well. He told me that he didnt even think about it. I reminded him that its a JH Kelly standard that extension ladders are tied off because of the possibility of the ladders feet slipping or the top of the ladder tipping backward. He agreed to make sure to tie off all extension ladders from now on. I thanked him and then helped him track down some rope to tie the ladder off.

The lesson I learned from this experience is to never be afraid to speak to one of my coworkers when it comes to safety issues. Even the most conscientious person can overlook the little details that expose them to safety risks. The action I want you to

take is the next time youre walking your job, take the time to look for the little details that could improve productivity, quality or safety that can easily be overlooked. The benefit you will gain is a high quality, productive, safer job site that you and your team will be proud of.

Most golfers, fisherman and hunters think nothing of giving their buddies tips on how to swing, stand, cast, or walk while hunting in the woods. Working with the highest degree of productively and safety must be as important as improving performance in our hobbies. So I challenge you to think about your coworkers with the same interest and eye toward continuous improvement, and be as willing to pass on your tips for improved performance. 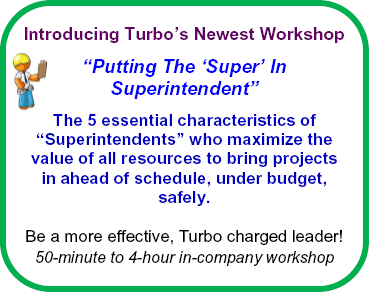