Change your life, be the first to arrive 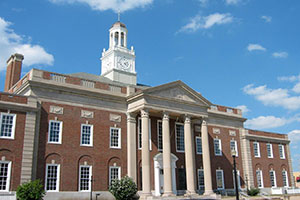 Day eleven of our journey from Loganville, GA to Seabeck, WA: We arrived in Independence, MO, the launching point for the Land Grant Oregon Trail pioneers. Independence was founded on March 29, 1827 and was an important frontier town. Independence was the rendezvous point for wagon trains following the Santa Fe, Oregon, and California trails and later, the California gold rush. At its height, there were eleven blacksmith shops that were around Independence's town square. President Harry S. Truman, native son of Independence said of his hometown, "Where the trail begins, and the buck stops."

I called the nearest RV camp to see if they had room for us in a pull-through site. They told me they had room, but no pull-throughs. I said, "You better hold what you have available." It only took us five minutes to get to Campas RV Site, and only a couple more minutes for me to register. When I came back out to our RV, I said to Donna Lee, "I've got bad news and good news. The bad news is all the pull-throughs were reserved. The good news is since we got here first, they gave us the last available pull through anyway." We always operate with positive expectancy, expecting our greater good. Our daily affirmation is, "Good things always happen to us."

Of course, the lesson we learned from this experience is the importance of asking for what we want - a pull through site - and the importance of showing up early with positive expectancy. I am sure the Oregon Trail pioneers operated from the same frame of reference. Those front runners who showed up in Independence early with positive expectancy had many, many challenges on their six-month trek across 2,100 miles of rugged, uncharted territory. The promises of 160 free acres provided the motivation.

The lands from the Land Grant Act of 1862 were all on a first-come-first-serve basis. The first to arrive in the Willamette Valley had the best choices. I bet if you think about it for only a few minutes you will think of your own example: best seating in a restaurant, movie or concert, best position on a parade route or marathon, missing out because you were late, or gaining special advantages because you were the first to arrive.