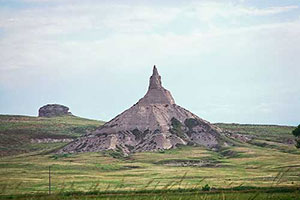 June 23rd, our 57th wedding anniversary, and day 15 of our journey from Loganville, GA to Seabeck, WA. We left Ogallala, NE and set out for Chimney Rock. We spotted landmarks along the way: Independence Rock, Courthouse Rock, Jail Rock, Scott's Bluff, Soda Springs, growing more excited until we finally saw what is, unmistakably, Chimney Rock. These were important landmarks for the westward bound pioneers.

Chimney Rock was one of the most significant signposts on the Oregon Trail. To the pioneers, Chimney Rock signaled the second phase of their long journey west, the difficult mountain passage was about to begin. The pioneers didn't have cell phone apps, they didn't have a AAA Trip Tick. They only had signposts. Like all leaders, they were the mapmakers.

We arrived at the Chimney Rock Interpretive Center just 30 minutes before closing time, read some of the geological history, looked at Chimney Rock through binoculars and caught the end of the Park's Department film. At 5:00 PM we were, unceremoniously, shown the door.

It was late, we had no reservations for the evening. RV campsites are few and far between in this rugged, desolate, desert of Nebraska. I'd noticed when we turned off the highway, a small campsite and we pulled in to check it out. Joe, the owner, greeted me with warm enthusiasm, "Certainly, we have the perfect spot for you! I'll put you right up front. Chimney Rock will be lit up later tonight." I didn't tell Donna Lee what was coming.

Our timing was perfect. The site Joe assigned us for the evening was front row entertainment. Black Angus cattle were grazing just in front of our RV and within what seemed like arm's length was Chimney Rock, like the screen of a drive-in movie.

At nightfall, the parks department illuminates Chimney Rock. It was spectacular! The dark night sky was filled with stars and Chimney Rock lit up just for us. It's something will never forget, the perfect anniversary celebration. 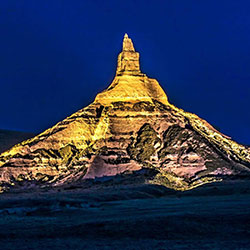 We all need landmarks; memories of those days that mark out our lives. For 50+ years we've ended our day by asking, "What was the highlight of your day?" What a great question! Chimney Rock, lit up for us in all its glory, was the highlight of this day. What was your highlight today? Asking this question will add richness to your relationships.

"At this place was a singular phenomenon, which is among the curiosities of the country. It is called Chimney. The lower part is a conical mound rising out of the naked plain; from the summit shoots up a shaft or column, about one hundred and twenty feet in height, from which it derives its name. The height of the whole . . . is a hundred and seventy-five yards . . . and may be seen at the distance of upwards of thirty miles."

See How To Turbocharge You: 6 Steps To Tap Your True Potential 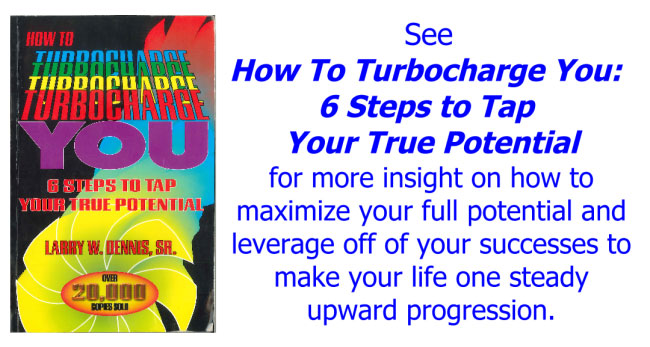 
Leaders are the mapmakers.

Leaders are the mapmakers.