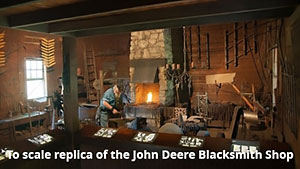 Day 22 of our westbound 2021 Cross Country Adventure: Grand Detour, IL. While we were visiting President Ronald Reagan's childhood home in Dixon, Illinois our enthusiastic host recommended we visit the nearby John Deere Historic Site. We weren't sure of what to expect. You may be amazed to learn that there are no tractors, combines, or riding lawnmowers. Instead, we found the excavated foundation of the historic John Deere Blacksmith Shop. This turned out to be one of the most important stops of our summer.

John Deere's customers, who worked the fertile soil of Central Illinois, kept bringing in their broken plows. The plows were crudely constructed of wood and an attached cast iron blade. The moist soil clung to the cast-iron blade after only plowing a few feet. The farmers "woahed" the team, drug the plow back, then knocked off the muck before plowing on. This was hard, slow labor. John knew there had to be a better way. 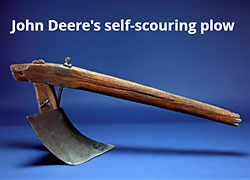 The blacksmith shop's where you went instead of a hardware store or garage. That's where you got your hinges, latches, brackets, harnesses, your wagon repaired, and horses shod. John traded for a piece of steel, then began experimenting with ways to cut and shape the steel. He designed a polished, curved blade, his "self-scouring steel plow." The dirt would simply peel off.

The 1860 Census showed 15,720 workers in 7,504 blacksmith workshops. So why was John the first to solve the problem of the mucked-up plows? 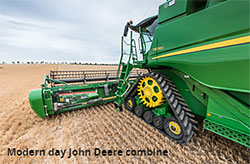 The more I ponder the lives of those who have made our world a better place, the more I'm sure it's a combination of these motives. These motivations provided the drive and determination to stay in the blacksmith shop, after all the days' work was done, night after night, after night, experimenting until the answer was found. These inventive entrepreneurs refuse to quit. Their determination, faith, and patient persistence changes the world for the better.

Now it's your turn. What's one of the problems your customers face, a problem no one has solved? Don't over complicate it. It doesn't have to be a huge problem as sticky as the 19th century farmer's problems. Find a solution, sell the solution. Remember John Deere only sold three plows his first year! You'll do your part in making the world a better place. 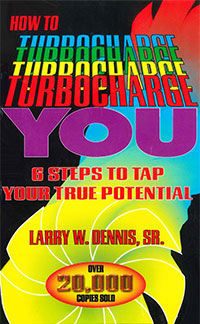 How to
Turbocharge You:
8 Steps to Tap
Your True Potential

for more insight on how to maximize your full potential and leverage your success to make your life one steady upward progression.