Nathan, foreman for a sheet metal contractor in Clackamas, OR, told session two of the Leadership Development Lab: 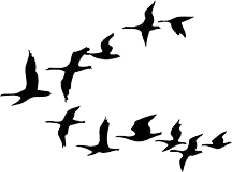 "A little over a year ago I was new in the company and only knew the few people I was working with in the field. My company called in my whole department for a meeting they hoped would help us all come together as a team. In the meeting we discussed ways we thought we could help each other, ways to better communicate, and how a team should work together. There were many examples given. One of the most dramatic illustrations was a video of how and why geese fly in a 'V' formation. The point was clearly made that by flying in the 'V' formation the whole gaggle gets to where they are going easier and faster. The video pointed out how the lead goose flies in the point position until it tires and then a new goose takes the point and so on.

"The video reminded me of a joke, so when it was over I asked the group if anyone knew why one side of the geese 'V' formation is longer than the other. One gentleman, who I didn't know, genuinely asked why, as if I would give a very scientific answer. I simply said, 'There are more geese on that side, dummy!'

"The entire room went quiet for a second, and then burst out laughing. Turns out the gentleman, I had just called a 'dummy,' was the Vice-President of the company. 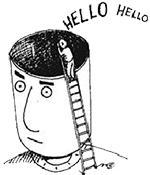 "The lesson I learned from this experience is (if I am determined to be a smart aleck) be sure to know who is in the room or better yet give up on the idea of trying to be a comedian. They pay me to be great at completing sheet metal projects - not to be a great comedian.

"The action I call you to take is to stop with the smart aleck, critical comments that can cause others embarrassment or make them look foolish. Those snarky comments can hurt and demean. They never make you look half as smart as you may think they do. In fact, without you knowing it, they make you look like a dummy.

"The benefit you will gain is greater self-respect and the respect of everyone on your team."

Leadership Principle #3 teaches Don't Criticize, Condemn, or Complain. Each of these three behaviors are natural enough and none of them contribute to the success of an engaging leader. Snide comments and "jokes" that poke fun at others are simply a disguised form of criticism. It is very easy to fall into this smart aleck trap. When you do, if you do - you are the one who is trapped.

"Putting the SUPER in Superintendent"

is a 50-minute on-site workshop. This program brings into sharp focus the most important qualities and behaviors of the

"SUPER Superintendent" who ensures you are the builder of choice and consistently "beat the bid."

This 50-minute on-site workshop features all of the "-ations" that are characteristic of Turbo Leadership Systems training:


Pick one:
smart aleck
or
self-respect