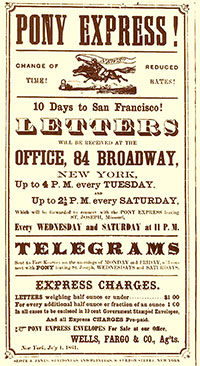 On the fourth day of our return trip from Oregon back to Georgia we stopped in Gothenburg, NB. We slowly drove by several of the beautiful, late 1800's homes that are carefully maintained to pristine condition. Then we visited one of the original 1860 Pony Express relay stations. This was one of 184 Pony Express relay stations along the 1,966-mile trek from St. Joseph, MO to Sacramento, CA. The route was taken by the 49'ers beginning in 1849, and the California Trail pioneers beginning in 1864. The trip west took these pioneers four to five months. Now the amazing Pony Express riders had collapsed the time to only ten days.

The charge for a Pony Express delivered letter was $5 an ounce. At that time, the average wage was $1.25 a day, so the postage was the equivalent of one week's wages. The enterprise, which was conceived by William B. Waddell, required along with the relay stations, 600 horses, and 120 riders. The youngest of the Pony Express riders was 11 years old! These riders were signing on for $25 per month, hundreds of times the average wage. To understand the magnitude of the Pony Express rider's occupation, read the attached "riders wanted" advertisements and the pledge each rider took before signing on. 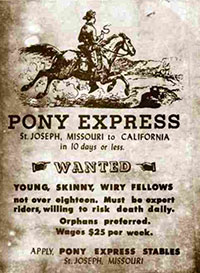 On April 14, 1860 the first westbound rider arrived in Sacramento, CA with the mail from St. Joseph, MO. He was heralded by canon fire, a brass band and enthusiastic crowds.

In 1860, Congress authorized a bill to establish telegraph wires from coast to coast. The first telegram from the west to the east was sent on October 25, 1861. It was to President Abraham Lincoln in Washington, DC., announcing California's loyalty to the Union. The telegraph, with the speed of seconds, was the equivalent to our text messages today. The "click, click" of Morse Code dots and dashes sounded the death knell to the Pony Express. The last rider made his run in October 1861. In all, they carried the mail 616,000 miles, equal to 24 times around the earth during the 18 months the enterprise was in operation.

I thought about this romantic, uniquely American enterprise, and realized how abruptly it ended. I said to my wife without much thought, "If this had been a federal government project, they would've found a way to keep it going. We might still be receiving mail by Pony Express today." This concept is not unlike the elevator operators who continued to work in the Washington, D.C. capital for decades after the elevators were all completely automatic!

I honor all entrepreneurs, like William B. Waddell, who take the risks required for innovation in the creation and advancements that lead to progress. So today, thank an entrepreneur for their service, for the risks they've taken, for the price they have paid, for all the comforts, ease, and access to instant communication and information, we so naturally take for granted. 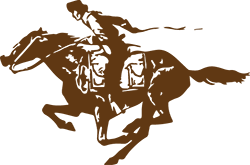 "I, _________________ DO HEREBY SWEAR, BEFORE THE GREAT AND LIVING GOD, THAT DURING MY ENGAGEMENT, AND WHILE I AM AN EMPLOYEE OF RUSSELL, MAJORS AND WADDELL, I WILL, UNDER NO CIRCUMSTANCES, USE PROFANE LANGUAGE, THAT I WILL DRINK NO INTOXICATING LIQUORS, THAT I WILL NOT QUARREL OR FIGHT WITH ANY OTHER EMPLOYEE OF THE FIRM, AND THAT IN EVERY RESPECT I WILL CONDUCT MYSELF HONESTLY, BE FAITHFUL TO MY DUTIES, AND SO DIRECT ALL MY ACTS AS TO WIN THE CONFIDENCE OF MY EMPLOYERS. SO HELP ME GOD." 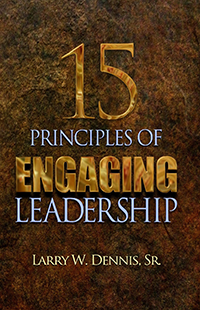 for examples of how engaged leaders innovate and motivate to generate advancements.