Celebrating 850 Issues of
The Turbocharger 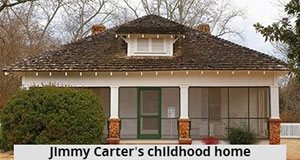 This past week, as a part of our trip to southwest Georgia, we visited Plains, GA the birthplace of the 39th President of the United States, James Earl "Jimmy" Carter. We were greeted like old friends at the visitor's center just outside of town. Even got my "picture taken" with President Carter. The treasure of Plains, GA is President Carter's childhood home! The house and grounds are maintained in the same state as when Jimmy grew up there during the mid-1920's. The backyard even includes goats and chickens as it did then.

In Jimmy's early years, they used the old outhouse in the backyard. The residence has running water, now, including a makeshift shower, a bucket with holes drilled in the bottom.

The recorded narrations in each room, including the living room with its battery-operated radio, are done by Jimmy Carter himself. His voice and strong southern gentlemen's accent add to the authenticity of the self-guided tour.

I was amazed that there was no one in the house, watching us as we went through to make sure nothing was disturbed. Good to know that tourists in South Georgia can still be trusted.

President Carter's sterling character and penchant for frugality was formed here. His father, James Earl Carter, Sr. believed everyone had to pay their own way. Beginning when Jimmy was less than 10, he was up with the rest of the family when the bell rang at 4:00 AM, and out the door to do his chores. This was the standard routine on their peanut plantation.

With no central heat, the house was heated by 3 fireplaces and the wood-burning cook stove. There sure wasn't any air conditioning, not even ceiling fans that are so prevalent here in the south. One of four children, they shared two bedrooms, each room had bookshelves with character building books on every shelf.

Jimmy, 96 and Roselyn, 93 maintain a very modest lifestyle compared to all living ex-presidents. The Carters still live in their Plains, GA house they built in the 1960's, not far from the Maranatha Baptist Church where, until recently, Jimmy taught Sunday School for over 40 years. The Carter's will celebrate their diamond anniversary, 75 years of marriage on July 7, 2021. 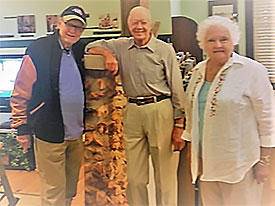 The lesson I learned from this experience is the importance of remembering and honoring my roots. Those positive, anchoring beliefs, truths, that never change. These binding beliefs, values are formed at a young age.

The action I call you to take is to revisit the anchoring truths you know. Be the best example of a principle-based life for others to follow.

The benefit you will gain is a sense of purpose and meaning that will help you experience bedrock joy.

"The bond of our common humanity is stronger
than the divisiveness of our fears and prejudices."
- Jimmy Carter, acceptance speech, Nobel Peace Prize 2002 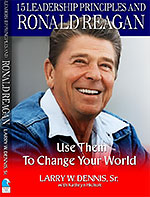