I Really Do Miss President Reagan

One man of courage makes a majority 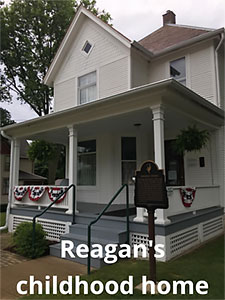 June 23rd, 2021.
Our 59th wedding anniversary, and the 22nd day of our westbound 2021 Cross Country Adventure. We found our way to Dixon, IL, and the childhood home of Ronald Reagan. My admiration for "The Great Communicator" began in 1964 when we heard his powerful Barry Goldwater campaign speech, "A Time for Choosing."

I was so moved by Ronald Reagan's passing in 2004 that I broke down in tears. I pledged to write a book titled 15 Leadership Principles and Ronald Reagan: Use Them to Change Your World. I was determined to show how President Reagan used the 15 Leadership Principles to secure cooperation from Congress, the Soviets, and the international community, to literally change our world. I thought it would take a year to write the book. Three years later, with Kathryn Hickok's priceless research and collaboration we finished. 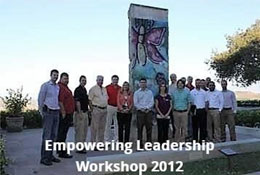 In 2012, I was privileged to conduct the Empowering Leadership Workshop for Massachusetts Electric's west coast leadership team at the Ronald Reagan Presidential Library in Simi Valley, CA. Our day included a private, pre-opening, curator-led tour of the library.

Two years ago, on our 2019 Cross Country Adventure we stopped at Ronald Reagan's Alma Mater, Eureka College in Eureka, IL. Walking across campus and visiting their small Reagan Library was a wonderful experience. This year we visited Ronald Reagan's modest childhood home. Our tour guide's quaint secondhand memories of his grandmother's relationship with teenage "Dutch" Reagan, combined with his authentic knowledge made the occasion rich and rewarding. 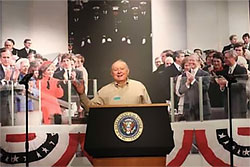 If it had not been for the heroic efforts of Postman Lynn Knights, there would be no childhood home to visit. In 1980, the house had fallen into such a dilapidated state that the city condemned it and scheduled the home for demolition. Knights, on his own, went before the City Council with a plea and a $500 down payment to preserve and restore the historic building.

As I read the account of Knights' courageous appeal, I was once again, reminded that one person of courage can win over the majority. They become a majority of one. It begins by standing up, speaking out. Over the objection of his advisors, President Reagan stood up against the Soviet Union when he said, "President Gorbachev tear down this wall."

To make a difference, to be the majority of one, more than anything else, you must summon the courage to say, even when your fears advise against it, "Tear down this wall."

Stand up, speak out, be counted. 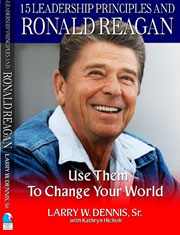