Never underestimate the influence of your example 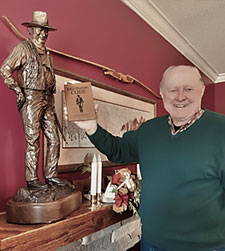 This past spring, when flying back to Oregon to teach the Leadership Development Lab (LDL), I reconnected with Clarence Hopkins, Owner and President of Royal Bearing. Clarence graduated from the LDL in 1991. Touring his facility and learning firsthand what an extraordinary business he has built was one of the highlights of 2020. While we were visiting in his office, I noticed Clarence had the same leather-bound book of John Wayne quotes I was excited to receive from Donna Lee for Christmas a couple of years ago. We enjoy a bronze of John Wayne we bought over 40 years ago. One of the big questions among our boys is, “Who is going to inherit the bronze statue?" Our small statue is a replica of the in front of the John Wayne Museum. 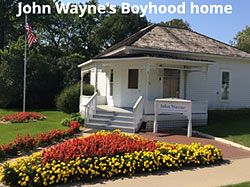 The Hopkins family are big John Wayne fans. Clarence's daughter has become personal friends with John Wayne's daughter, Marisa Wayne. When Clarence's grandson started the first grade wearing his John Wayne hat the teacher said, “You have to take your hat off now." This was his grandson's response, “Not today, Pilgrim." It doesn't get any better than that! 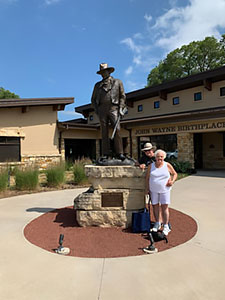 Clarence told me about the John Wayne Museum and Birthplace in Winterset, IA. We decided to make the museum part of our trail heading west.

Beginning in 1930, John Wayne is credited in at least 177 movies. The quintessential American playing the strength of character hero, John Wayne is etched into our collective psyche. The museum features the outfits he wore (hats, boots, guns), and a 1972 Pontiac Station Wagon with a raised roof to accommodate John's 6'4" frame more comfortably.

We enjoyed watching a collage of familiar clips including True Grit, Big Jake, The Alamo, and The Cowboys in the museum's theater. We walked next-door to tour the one-bedroom house he was born in. Since we are all aware of his impressive size, it may not come as a surprise to know that he was 13 lbs. at birth! 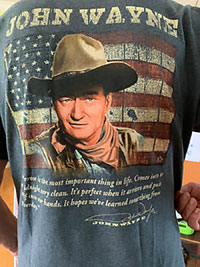 We picked up several souvenirs including the t-shirt I'm wearing.

"Tomorrow is the most important thing in life. Comes into us at midnight very clean. It's perfect when it arrives, and it puts itself in our hands. It hopes we've learned something from yesterday,"

The message ties so closely to the LDL's LAB action communication formula– Lesson learned, Action called for, Benefit promised. I just couldn't pass it up.

Here's a good question for us all – "what did I learn yesterday?" Most important of all, "How does this move my life forward?"

Your day is never wasted when you learn something.